The AGM weekend started with a visit to Mr John Smithson, Kirby Stephen, Cumbria on Saturday 3rd October in the afternoon to view the East of Eden Flock at home. This was a thoroughly enjoyable and sociable afternoon with the weather being dry. Thanks were extended to John for starting the AGM weekend with some excellent sheep to view.

The group then moved to the Kings Arms in Kirby Stephen where the serious business of the weekend took place and members were able to voice their thoughts and ideas for promotion of the breed in 2010.

Mr John Smithson has taken on a second term of office as Chairman and Mr John Watkins is to continue as Vice Chairman.

Mr John Smithson thanked Mr Michael Graham and Mrs Pat Imlah for their hard work whilst on council and hoped they would still be willing to volunteer help when needed.

Mr John Smithson reported that the show flock for 2008 was Mr David Jane of the Broadwood Flock with Mr Percy Tait of the Knighton flock in reserve place.

Mr John Smithson announced that the Society had never had occasion to present this award and felt privileged to be able to do so. John Watkins put forward the nomination and Mr Simon Wright gave a brief resume of the life and times with rouge sheep for the nominee Mr David Jane of the Broadwood flock.

Mr David Jane stated he was delighted and honoured to receive such an award.

Sunday morning 4th October saw a trail of cars leading across the hills out of Cumbria to visit Jeff and Sue Wilkinson, at Barningham, Richmond, Yorkshire.

This started with a tour of the flock at home in lush pastures and then a sheep dressing demonstration with a ewe kindly loaned by John Smithson and dressed by Stephen Doddsworth and Ian Teasdale. A paper is to be put together for those members that were unable to attend this very interesting demonstration it showed just how much time needs to be spent to present the sheep at shows and sales.

Jeff and Sue had kindly arranged a sheep judging competition as well, the judge being Mr Michael Graham. Everyone was urged to have a go and the lambs looked really well. The winner on the day was Mr John Smithson.

Thanks were extended Jeff and Sue Wilkinson for the fantastic day in Yorkshire and for their kind hospitality. John Smithson thanked everyone that had attended the AGM weekend and it is hoped to make a social weekend of the AGM in 2010. 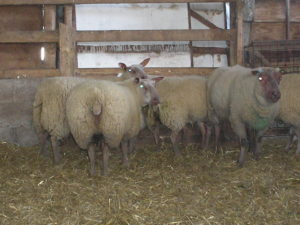